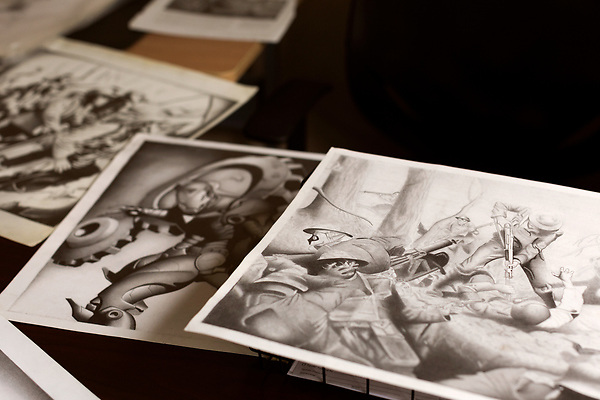 May 11, 2016. Kernersville, North Carolina.
Pencil drawings that PFC. Corey R. Clagett made while incarcerated at the United States Disciplinary Barracks at Fort Leavenworth for nearly 10 years.
PFC. Clagett pleaded guilty in 2007 to the charges of murder, attempted murder, conspiracy to commit murder and conspiracy to obstruct justice in the killing of 3 Iraqi detainees while he was deployed to Iraq as part of the 101st Airborne Division. Released on March 31, 2016, Clagett now works for the United American Patriots as the Community/Veterans Liason.
United American Patriots (UAP) is a non profit organization that offers funds for the defense of US service members accused of crimes during combat. Believing that the courts marshall system is weighted in the favor of the government, the UAP started the Warrior Fund 10 years ago to try and secure equal representation for service members attempting to prove their innocence in military courts.
© 2016 Jeremy M. Lange http://www.jeremymlange.com