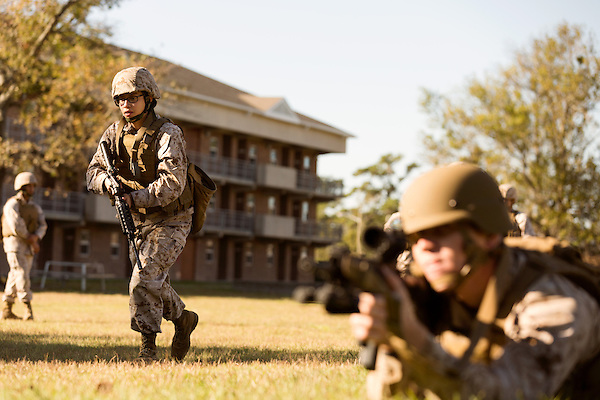 October 22, 2014. Camp LeJeune, North Carolina.
LCpl. Karla Cardenas, left, advances past another member of her fire team during patrol training for the 3rd Platoon of the Ground Combat Element Integrated Task Force. Marines in 3rd Platoon of the GCEITF are all considered provisional infantrymen as they have not been to the School of Infantry (SOI) previous to volunteering for the GCEITF.
The Ground Combat Element Integrated Task Force is a battalion level unit created in an effort to assess Marines in a series of physical and medical tests to establish baseline standards as the Corps analyze the best way to possibly integrate female Marines into combat arms occupational specialities, such as infantry personnel, for which they were previously not eligible. The unit will be comprised of approx. 650 Marines in total, with about 400 of those being volunteers, both male and female.
Jeremy M. Lange for the Wall Street Journal
COED
© 2014 Jeremy M. Lange http://www.jeremymlange.com