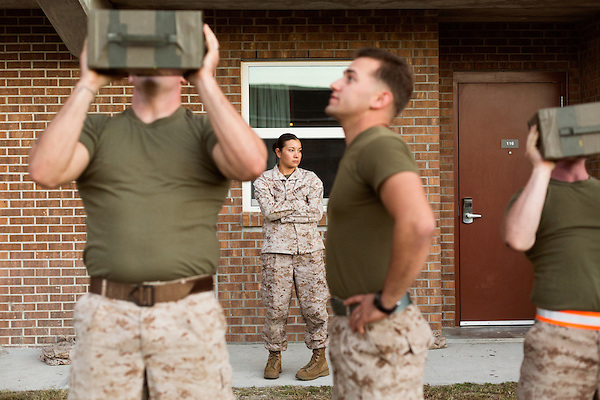 October 22, 2014. Camp LeJeune, North Carolina.
Cpl. Raquel Mathieu, age 22, center, watches as other Marines of the Ground Combat Element Integrated Task Force conduct the 30 lbs. ammunition box lift portion of the Combat Fitness Test (CFT). The CFT includes a half mile run, followed by a series of timed physical tests that simulate conditions they could encounter in combat situations.
The Ground Combat Element Integrated Task Force is a battalion level unit created in an effort to assess Marines in a series of physical and medical tests to establish baseline standards as the Corps analyze the best way to possibly integrate female Marines into combat arms occupational specialities, such as infantry personnel, for which they were previously not eligible. The unit will be comprised of approx. 650 Marines in total, with about 400 of those being volunteers, both male and female.
Jeremy M. Lange for the Wall Street Journal
COED
© 2014 Jeremy M. Lange http://www.jeremymlange.com